Today's post is my contribution to the very first posting of The Lacquer Legion!  The Lacquer Legion is a new monthly nail art challenge group hosted by Sarah, Rebecca, Leslie, and Sammy, and everyone can participate!  You can read more into detail in Sarah's post here. 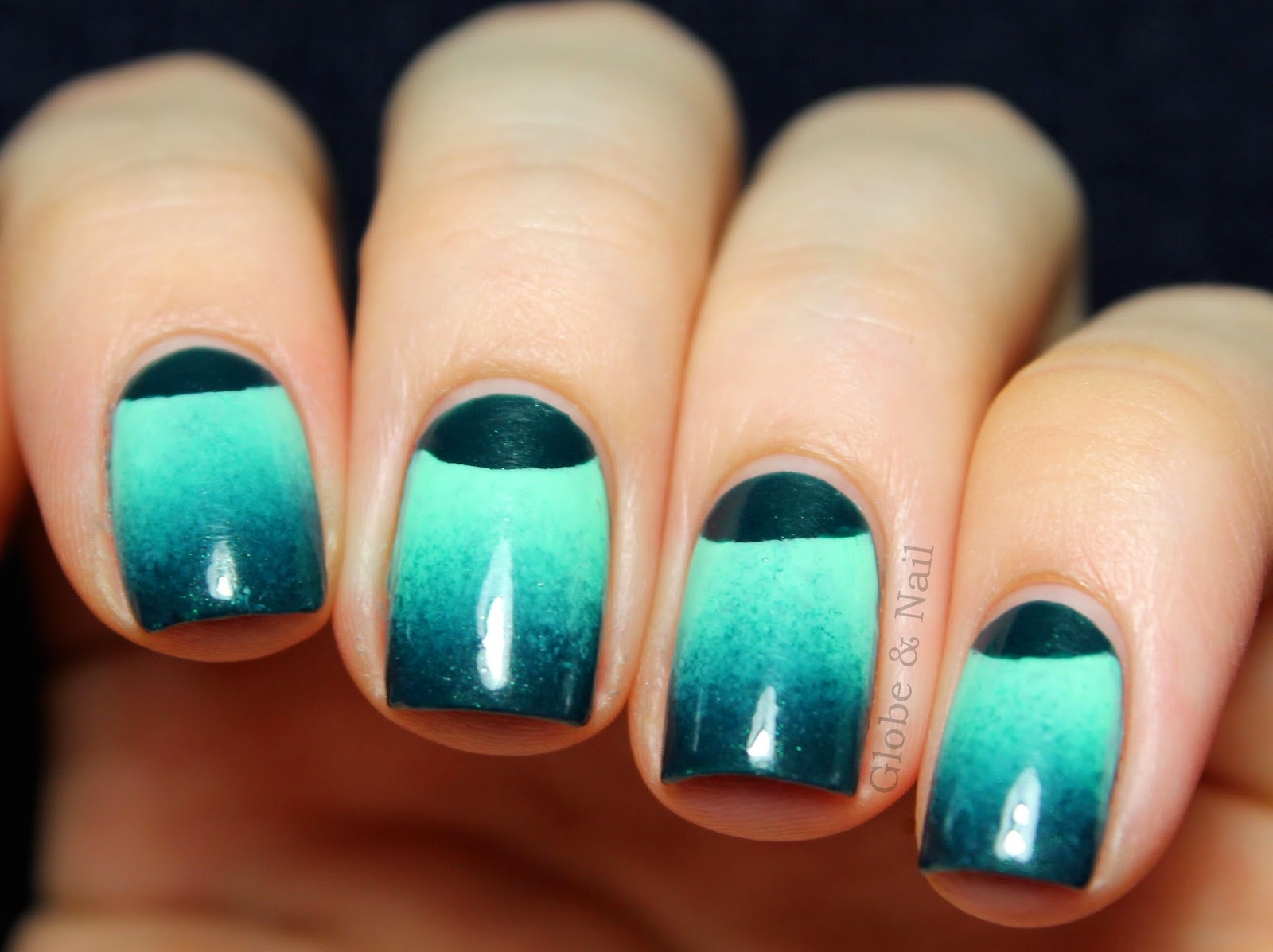 This month's theme is reinvention - to be interpreted in any way.  I was a little pressed for time and ideas but still wanted to participate, so I reinvented my second most popular nail art ever (but probably my favourite,) the half-moon gradient.  You can see my original post here.

For those of you who are curious, my most popular post ever is my reciprocal gradient nail art, which has since spread across the internet and been re-created so many times! 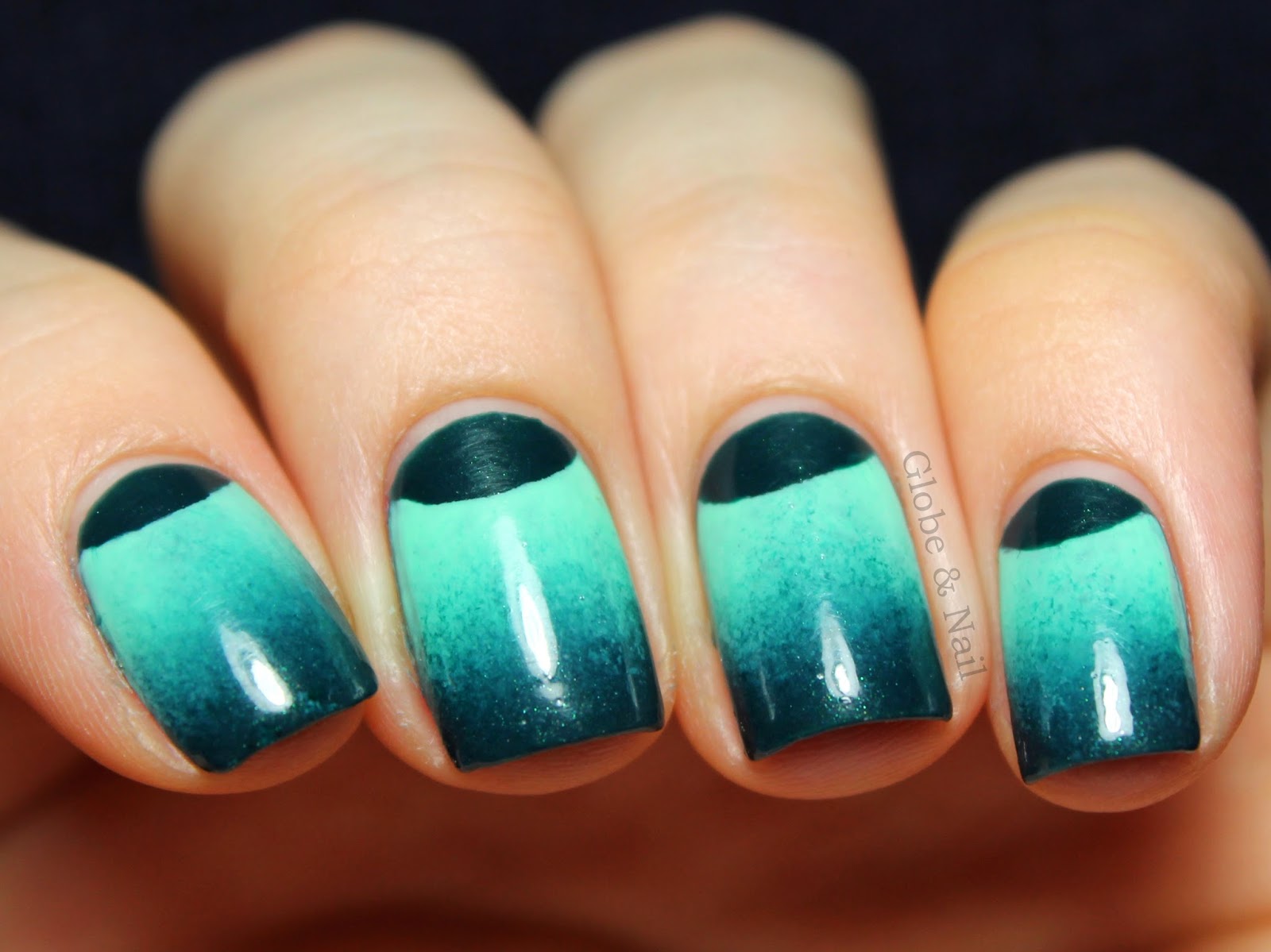 I chose to reinvent this look simply by changing up the colours to a combination I wish I'd tried ages ago, because I love it!  I started with two perfect coats of LaCC 1966, and a coat of LaCC 2013 top coat to speed things up.  Once that was all dry, I used hole reinforcers to mark off my half-moons, then sponged a gradient with 1966 and piCture pOlish Honey Dew.  It's all topped off with two coats of Seche Vite to smooth everything out. 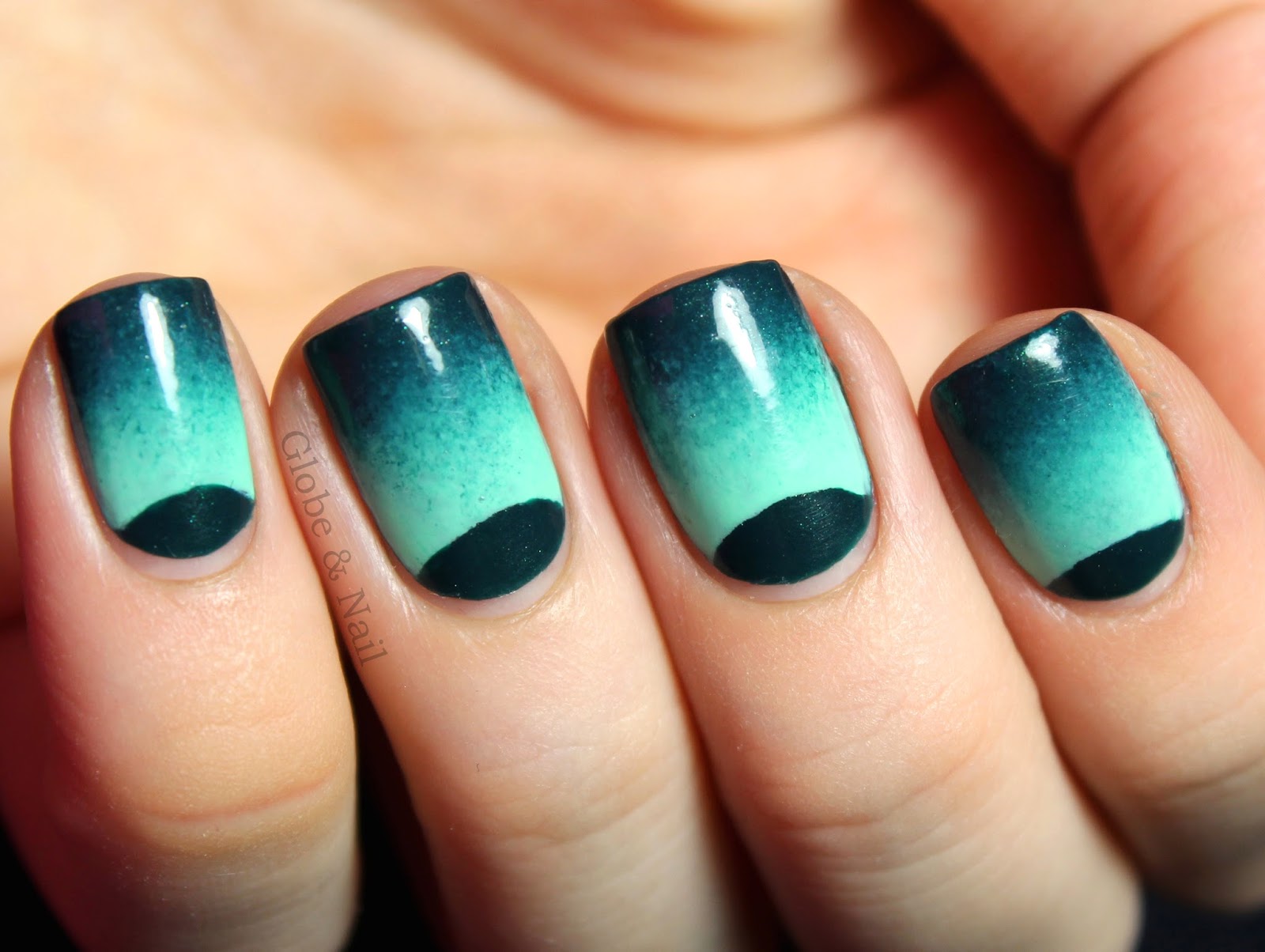 I'm so in love with how this turned out; I can't believe I waited over a year to re-create this look!!  I honestly can't decide if I like this or the original colour palette better... What do you think?  :)

If you take part in this month's The Lacquer Legion challenge, remember to post to social media with the hashtag #LLreinvention  :)  I'll be sure to check out everyone's manis!

I've got three stunning polishes from Lacquer Lust to show you today! If those names in the title don't make you want them, wait until you see the swatches!!

Good morning! Just a quick post today with a black and white textured look I've worn for the past two days.  :) 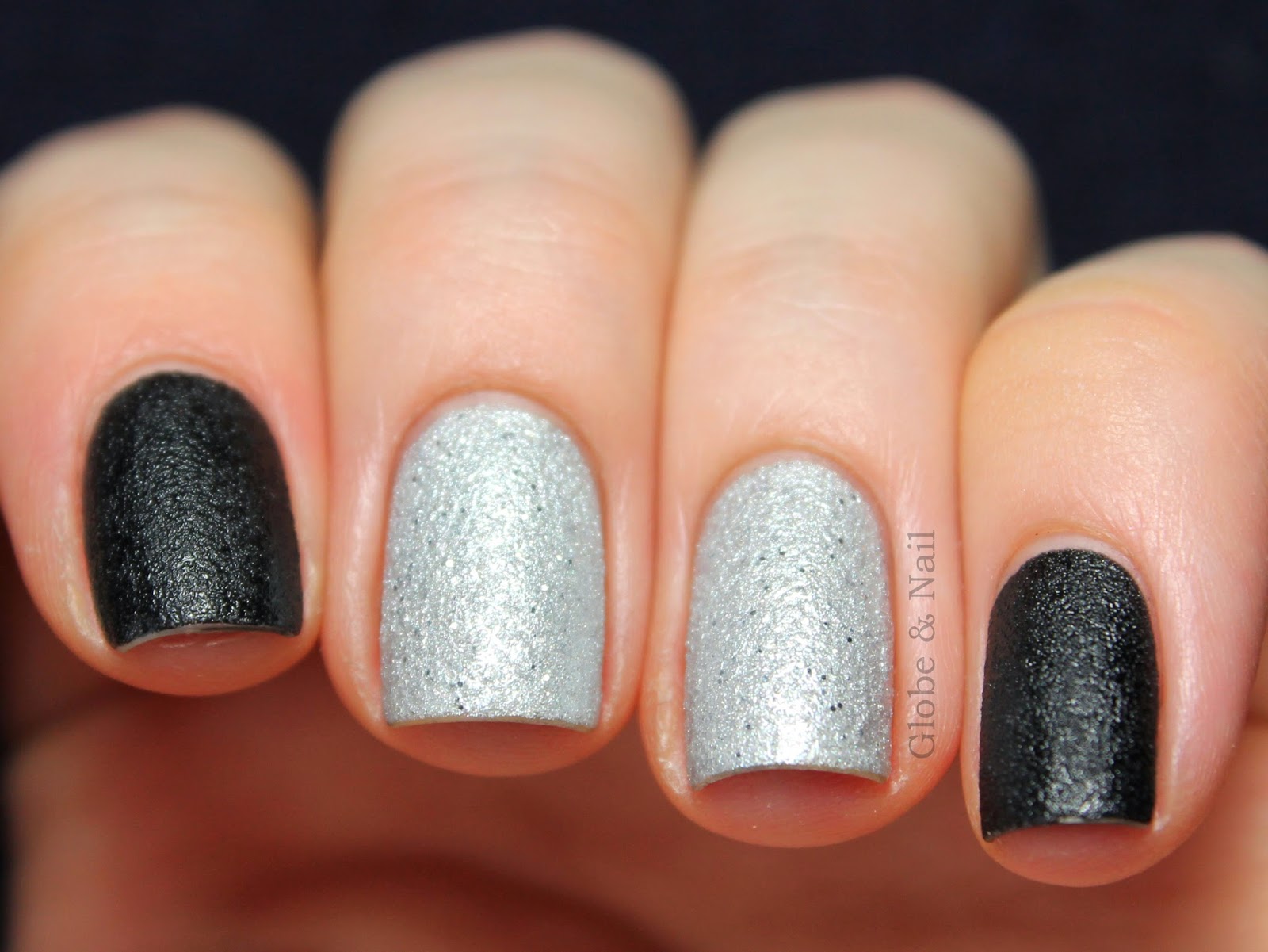 I got a mini bottle of OPI Solitaire from my Secret Santa last month which had been on my wishlist for a while, and I finally got around to using it!  (Thank you Blair!)  I layered two thin coats over a silver polish which I'll keep a secret for now because swatches will be on the blog soon... 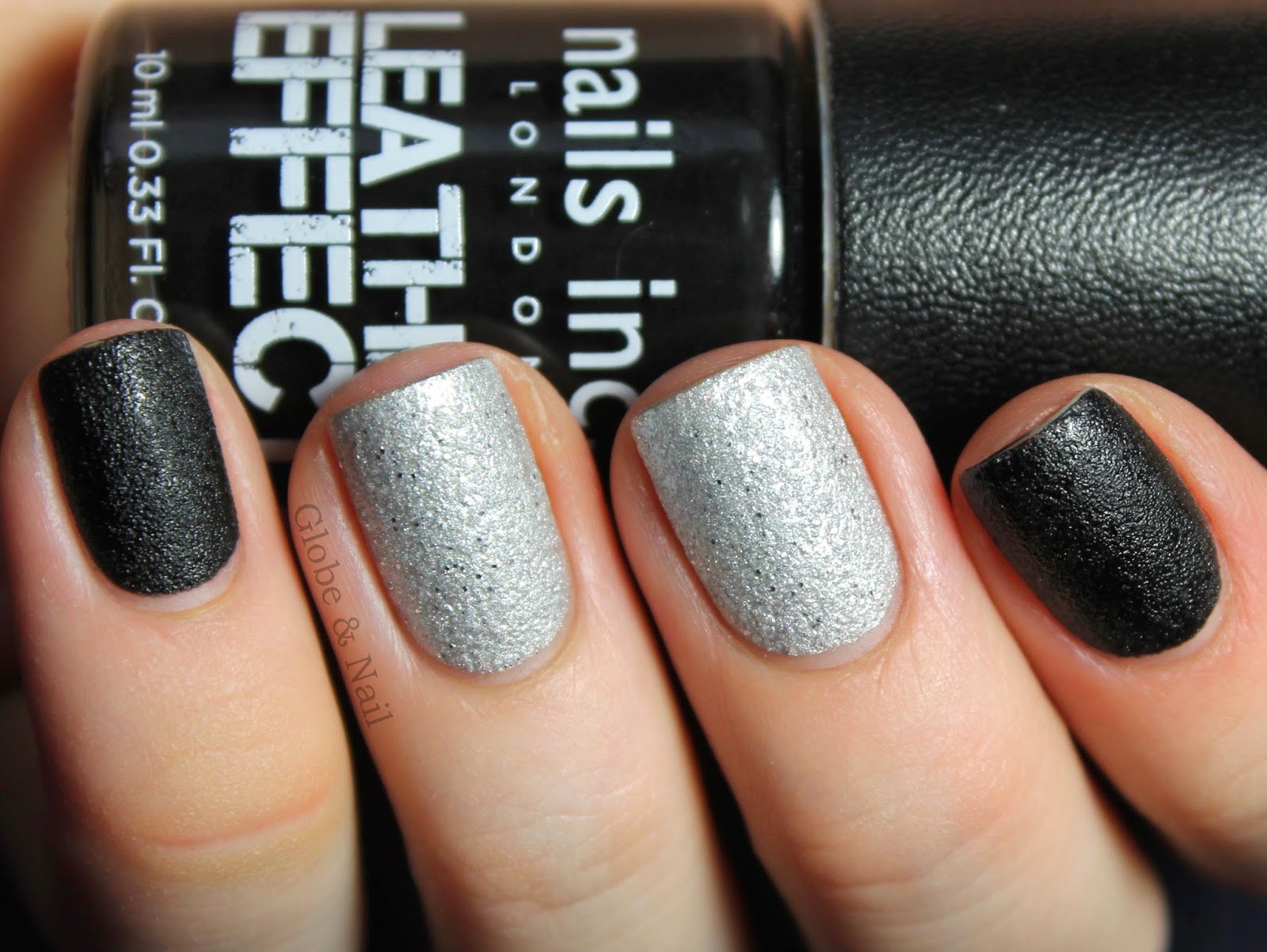 I finally caved and purchased Nails Inc. Noho over the weekend, which is part of the Leather Effect collection.  I've got the burgundy and light blue and have been wanting this one forever, and I'm so glad I finally bought it!  It's a super awesome jet black with the really cool leather finish that I love.  This is two coats; it's opaque in one if you're careful, but it does wear at the tips pretty quickly. 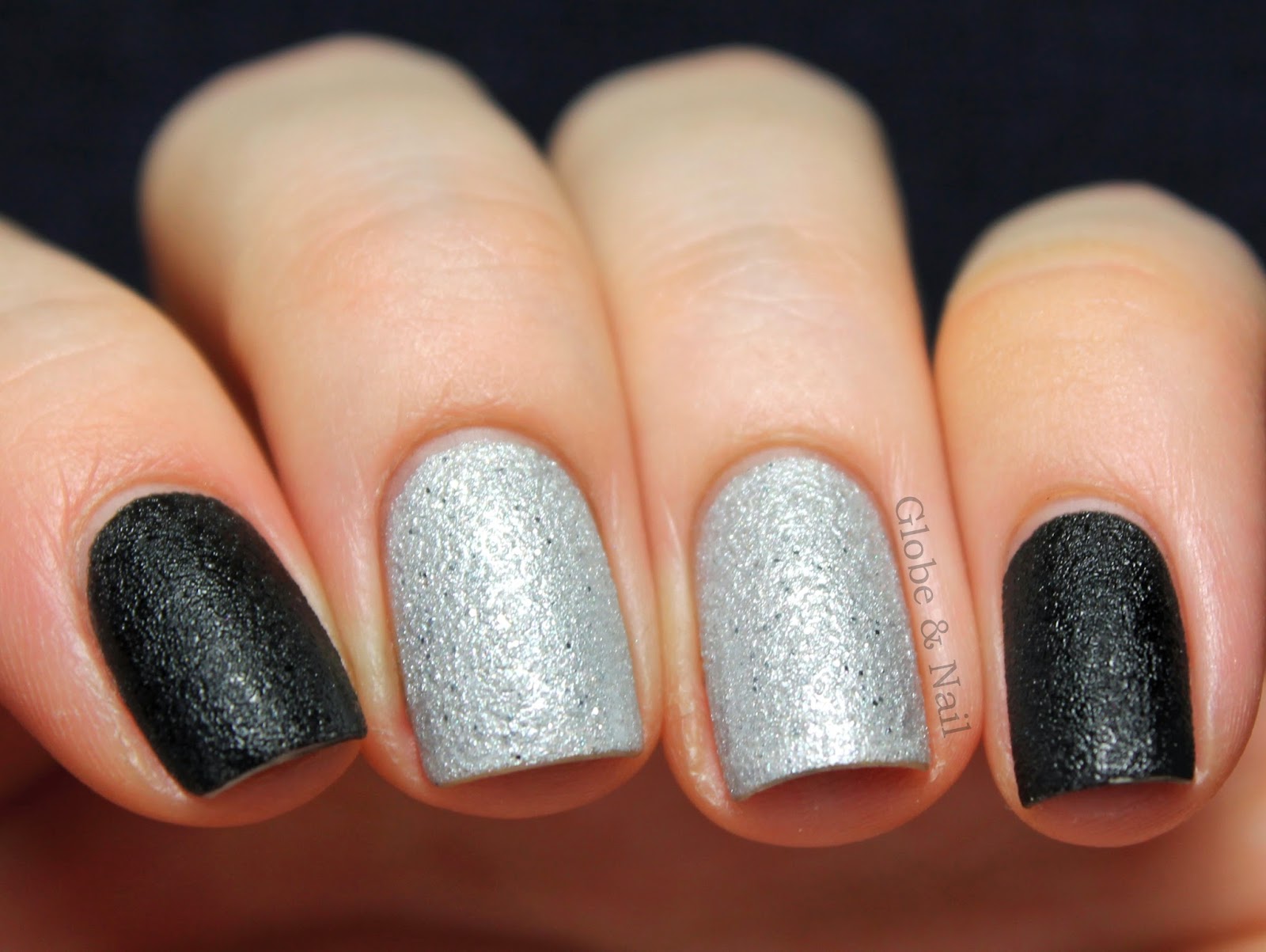 I really liked mixing the Liquid Sand and Leather Effect polishes in this mani; the different textured finishes were really fun together, and the black and white were a great contrast.  What do you think?  :)

Lacquer Lust: Un-Teal We Meet Again & Penny For Your Thoughts

Good morning! Are you ready for some gorgeous Lacquer Lust holos?  I certainly hope so, because I've got Un-Teal We Meet Again and Penny For Your Thoughts to share with you today!

Read on for lots more photos and a full review!
Read more »
Posted by Emma at 3:30 am 17 comments:

I mentioned in Friday's post  that I'd recycled the black nails from that mani and made an entirely different look, and that's what I'm sharing with you this morning! 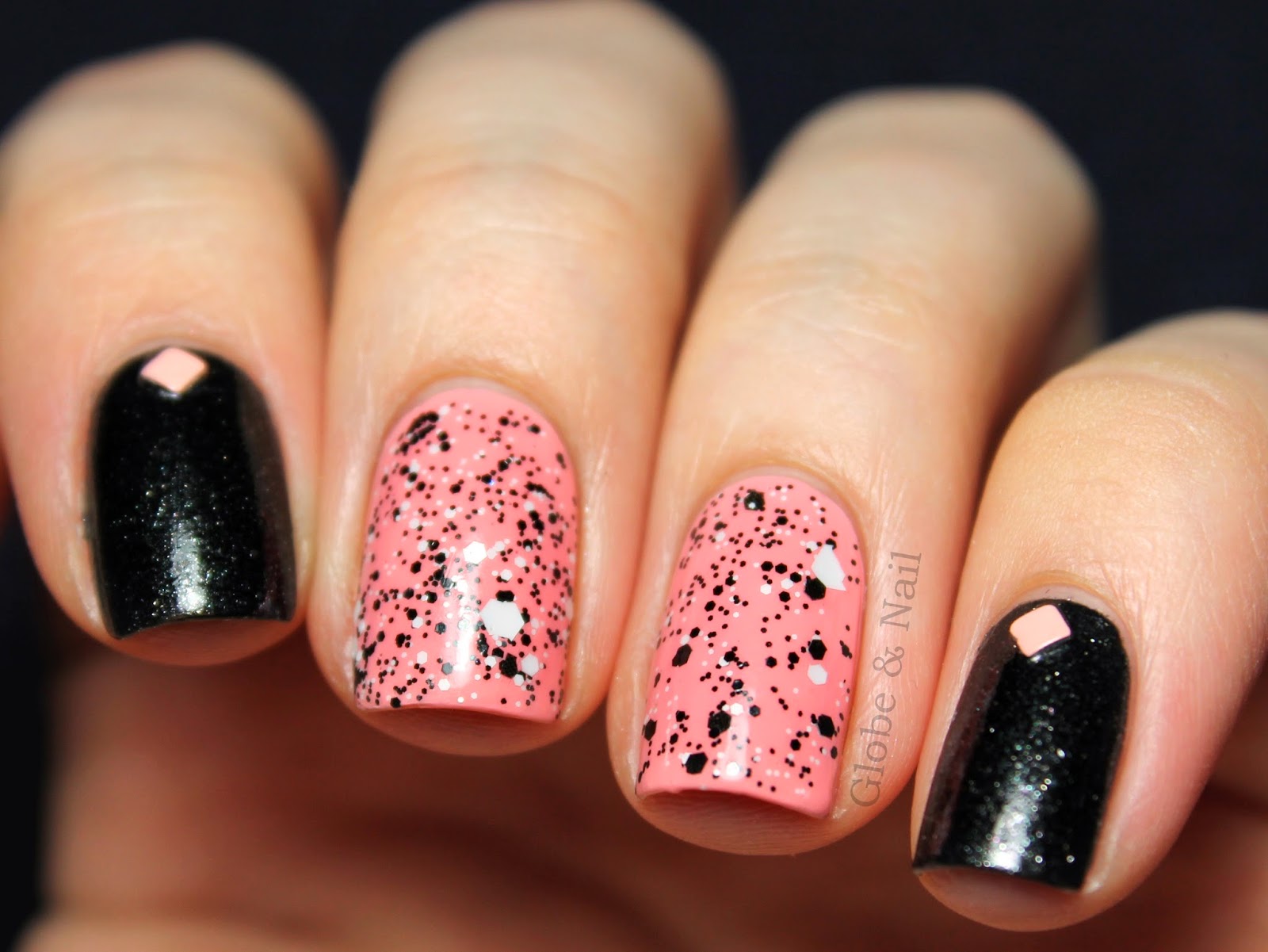 Same as before, the black nails are two perfect coats of LaCC 1999, which has great staying power when sandwiched between LaCC 2012 base coat and 2013 top coat!  To those nails I added some square peach studs from the Born Pretty Store. 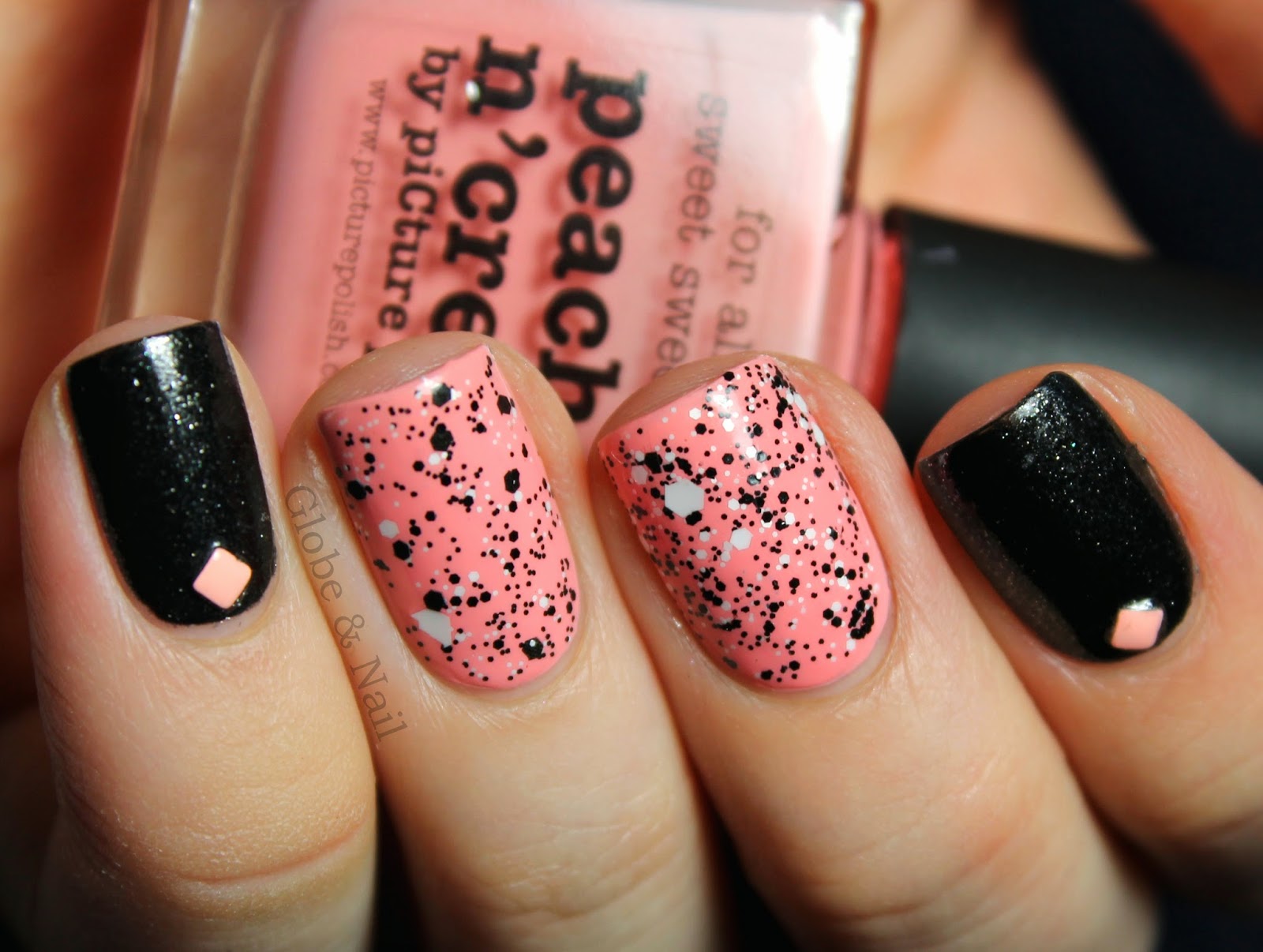 I changed my two accent nails up by putting on three thin coats of piCture pOlish Peaches n' Cream, a favourite spring/summer polish of mine!  The weather's not been very nice, so I was in the mood for something bright!  Those nails are topped with one easy coat of my favourite black and white glitter topper, Different Dimension Social Suicide.  All nails have two coats of LaCC 2013 top coat. 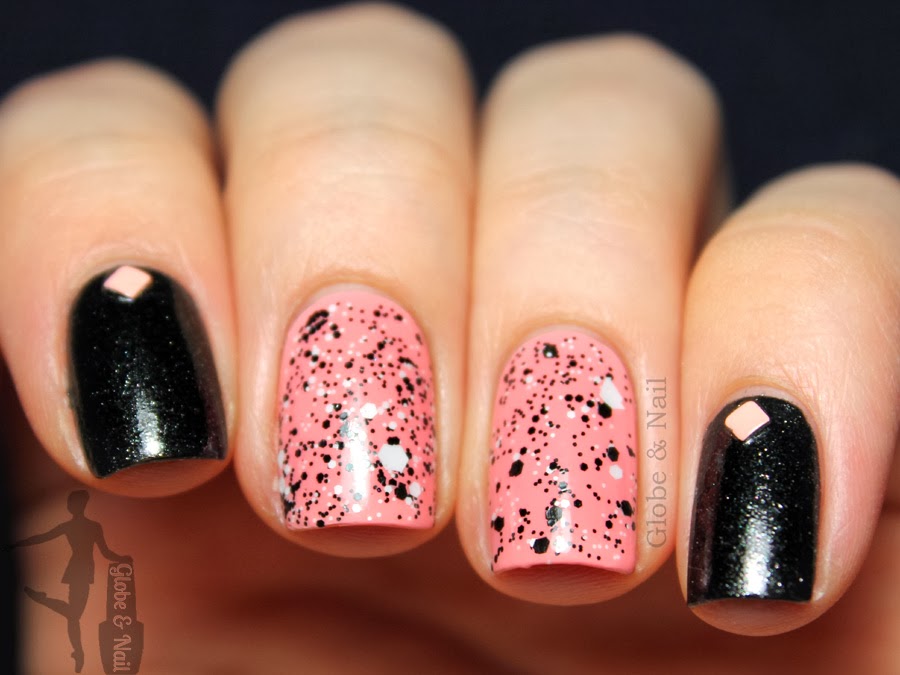 On a side note, what do you think of this different watermark?  I was trying to come up with something that was more unique and incorporated my logo, but I'm not sure if it's readable enough and if the image distracts from the nails.  Let me know what you think!

Anywho, I much prefer this look to the previous one.  Recycling those nails to use as a starting point for a very different double-accent look was a fun way to quickly change up my mani!  :)

While cleaning out my folders full of nail photos, I came across this navy shimmer comparison I did in the fall.  I've never actually done a comparison post before, but I figured these swatches weren't doing anyone any good hiding on my hard drive, so I'm sharing!  :)

I always say that my favourite colour is purple, but navy is a very close second, (if not a secret first.)  I wear way too much navy... That is, if there were such a thing as too much navy... Which I'm inclined to think there isn't.  It's such a classic colour that really goes with everything!  (And I'm a firm advocate that yes, navy even goes with black!!)  The most recent addition to my wardrobe?  These adorable navy velvet polka-dot pants from J. Crew; love them!! 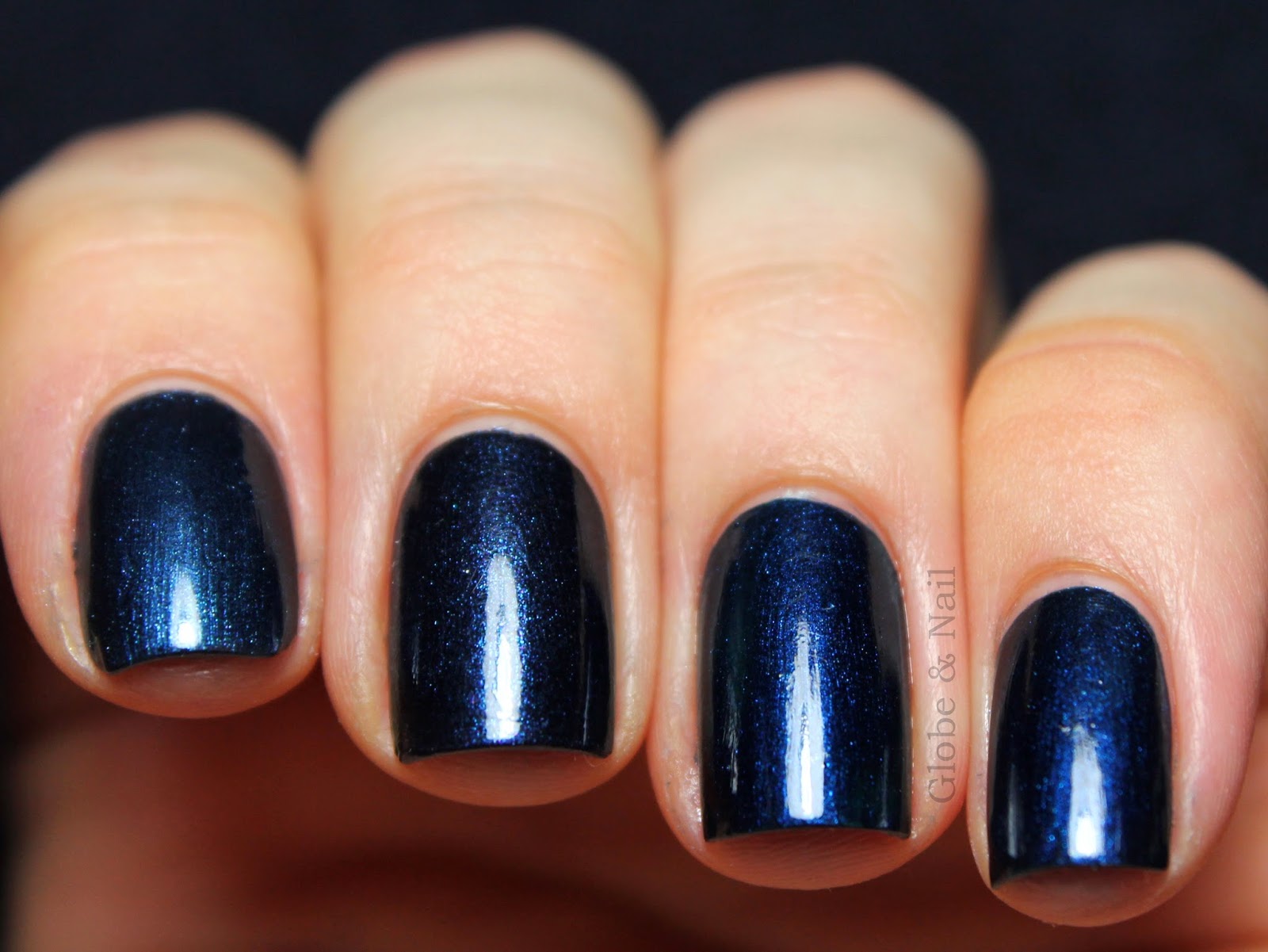 After all that, it should come as no surprise that I also own more than my fair share of navy polishes.  Here I've just compared the shimmers, but I've got at least two or three navy cremes as well.  Here we go! 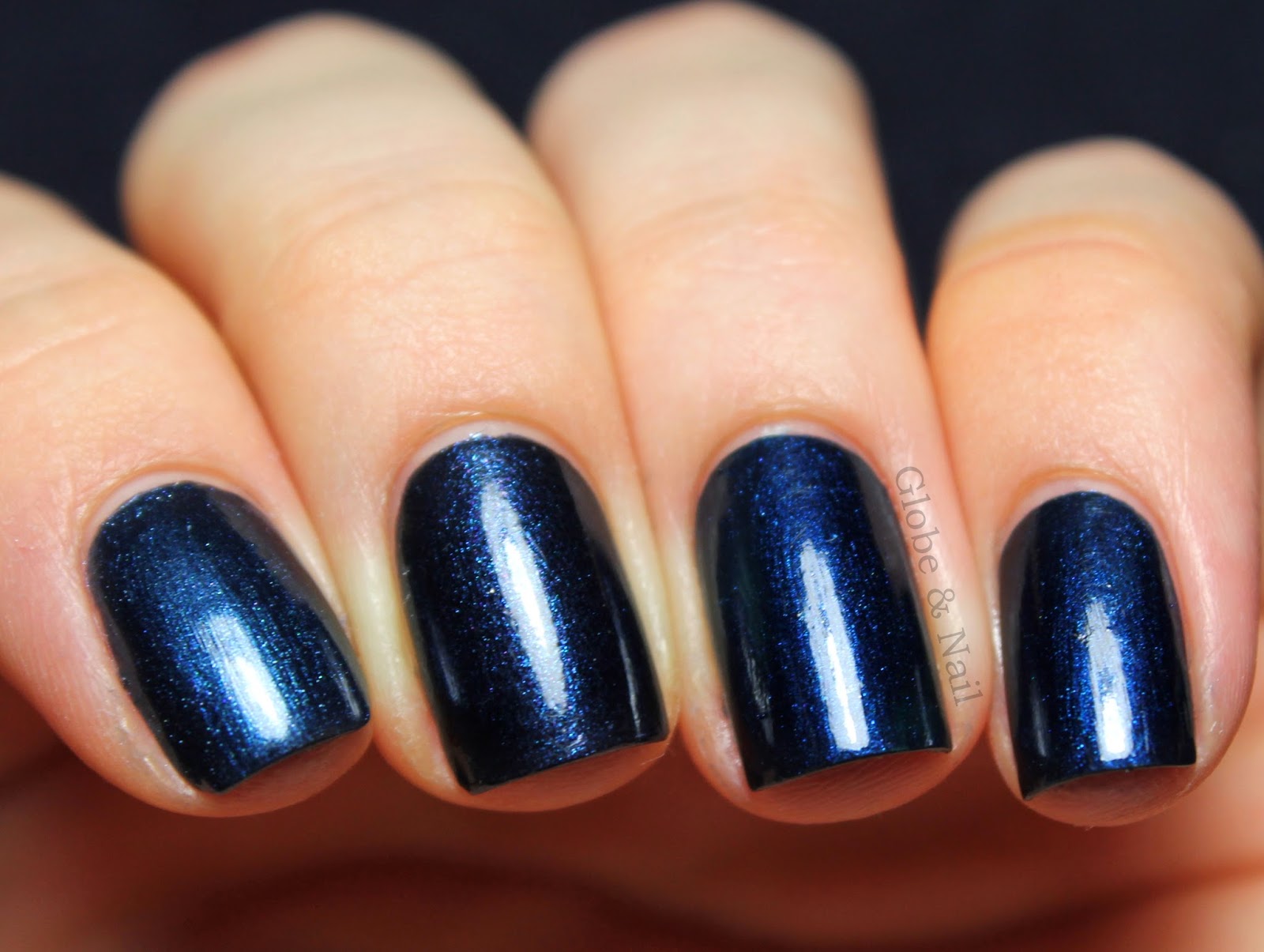 The shimmer in Big Smoke is obviously lighter, and it's more brushtroke-y than the others.  1974 has a slightly darker base than the rest, and the shimmer is more coarse and irregular which gives it a slightly different look.  In The Navy and Electric Blue are almost identical dupes with a lovely smooth glowy shimmer, although I may venture to say that the shimmer in Electric Blue glows just a tiny bit more. 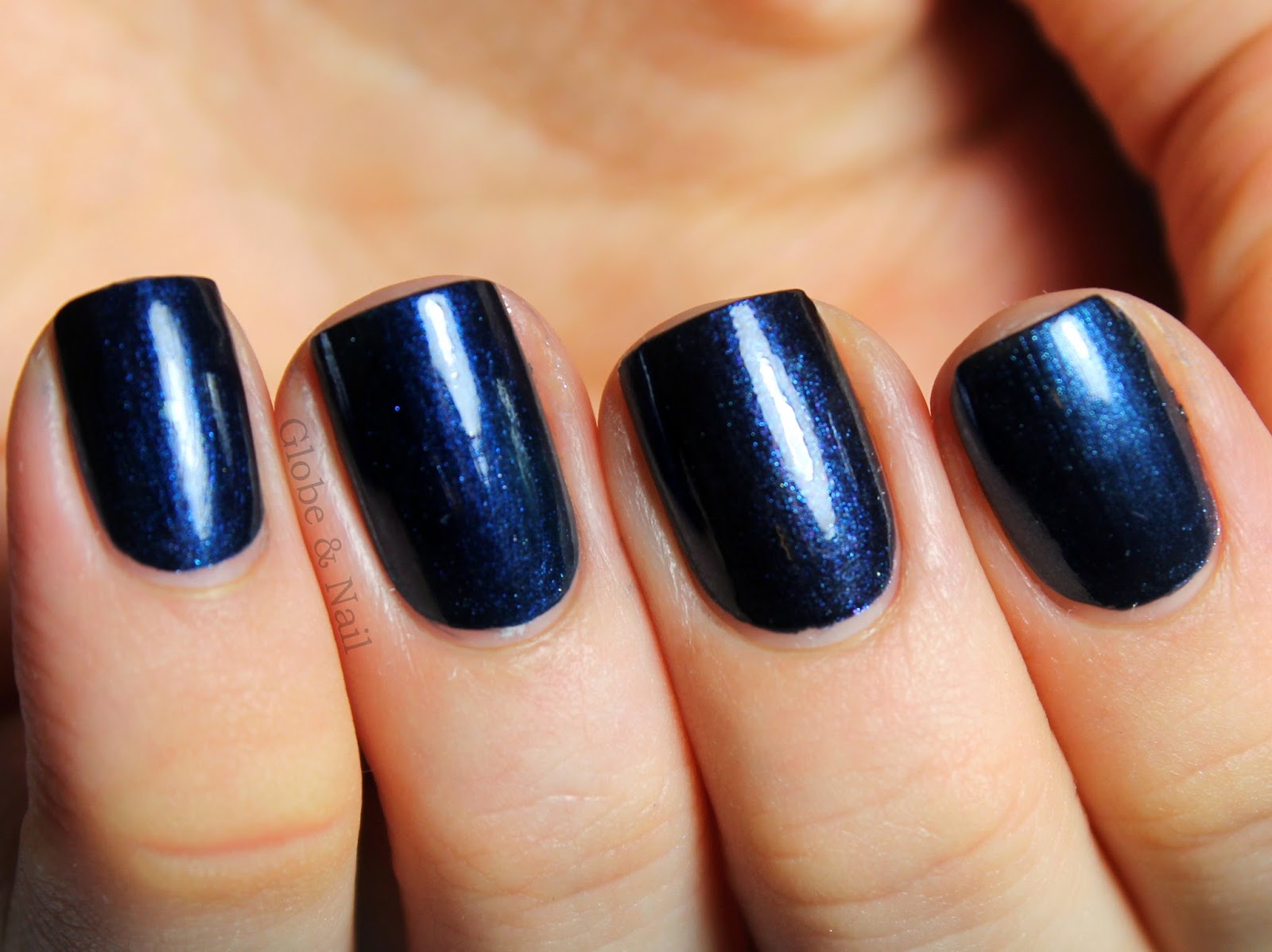 As for my recommendation, it depends what is most important to you.  As much as I love Butter London, Big Smoke falls short of the others here because it lacks the same depth of colour.  Miss Ashleigh In The Navy and piCture pOlish  Electric Blue are both one-coaters, but have slightly thicker formulas that require a careful hand to apply evenly.  The formula on LaCC 1974 is flawless, but it does require that second coat.
Do you have a preference here?  Or another favourite navy polish I should check out?  Let me know in the comments!  :)

Happy Friday!!  I'm so ready for the weekend... Anwyho, just a quick post this morning with a double-accent mani I wore a couple days ago.  :) 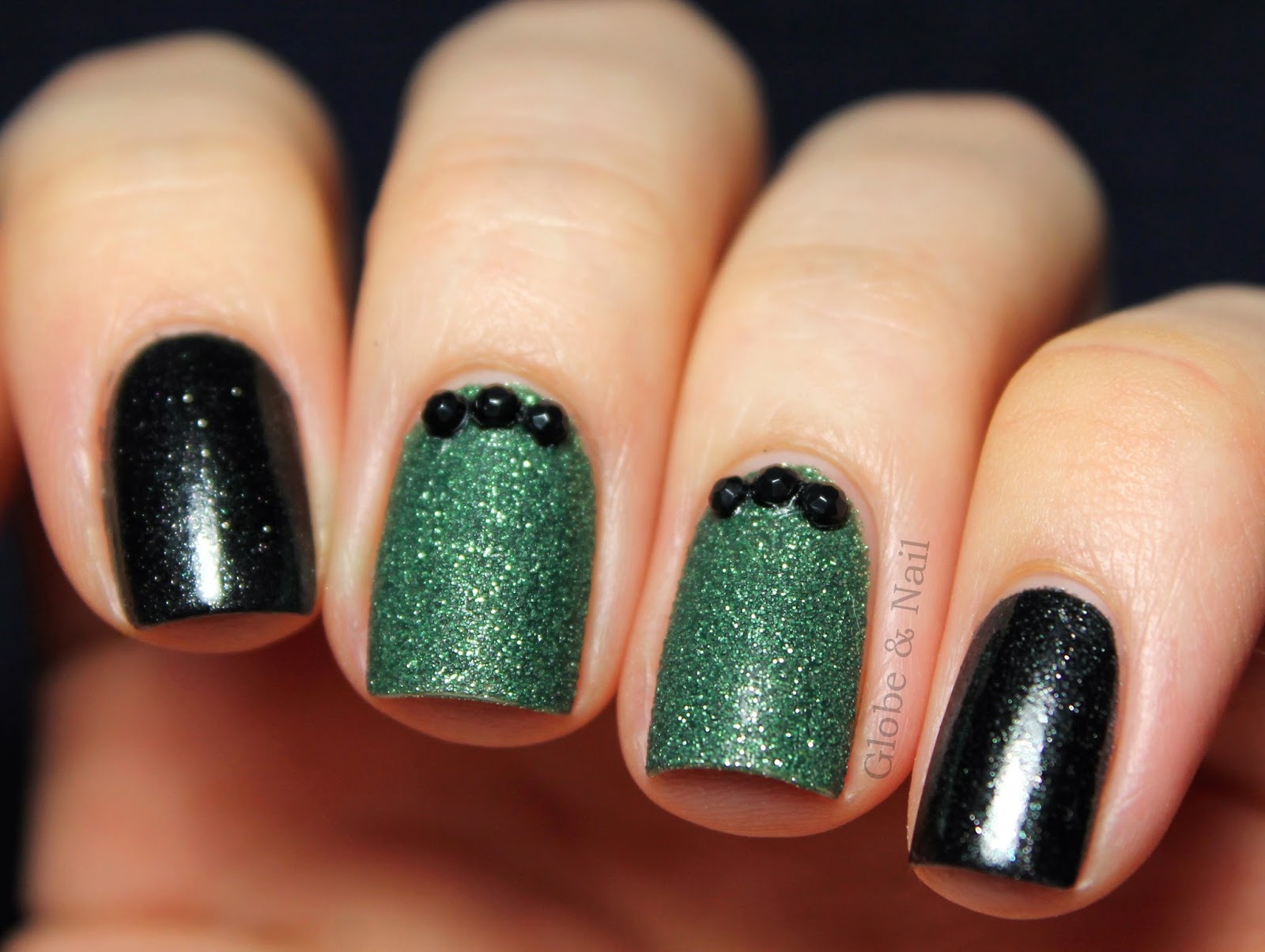 On my accent nails I used one perfect coat of Zoya Chita, and added three black studs from a Sally Hansen I <3 Nail Art kit using Seche Vite.  I wasn't too impressed with these studs, unfortunately; a lot of them are misshapen around the edges and have little pokey bits, and they stick up from the nail more than I'd like.  Although they did stay on for two whole days, without any top coat to seal them in!  (Didn't want to ruin the textured finish of Chita!) 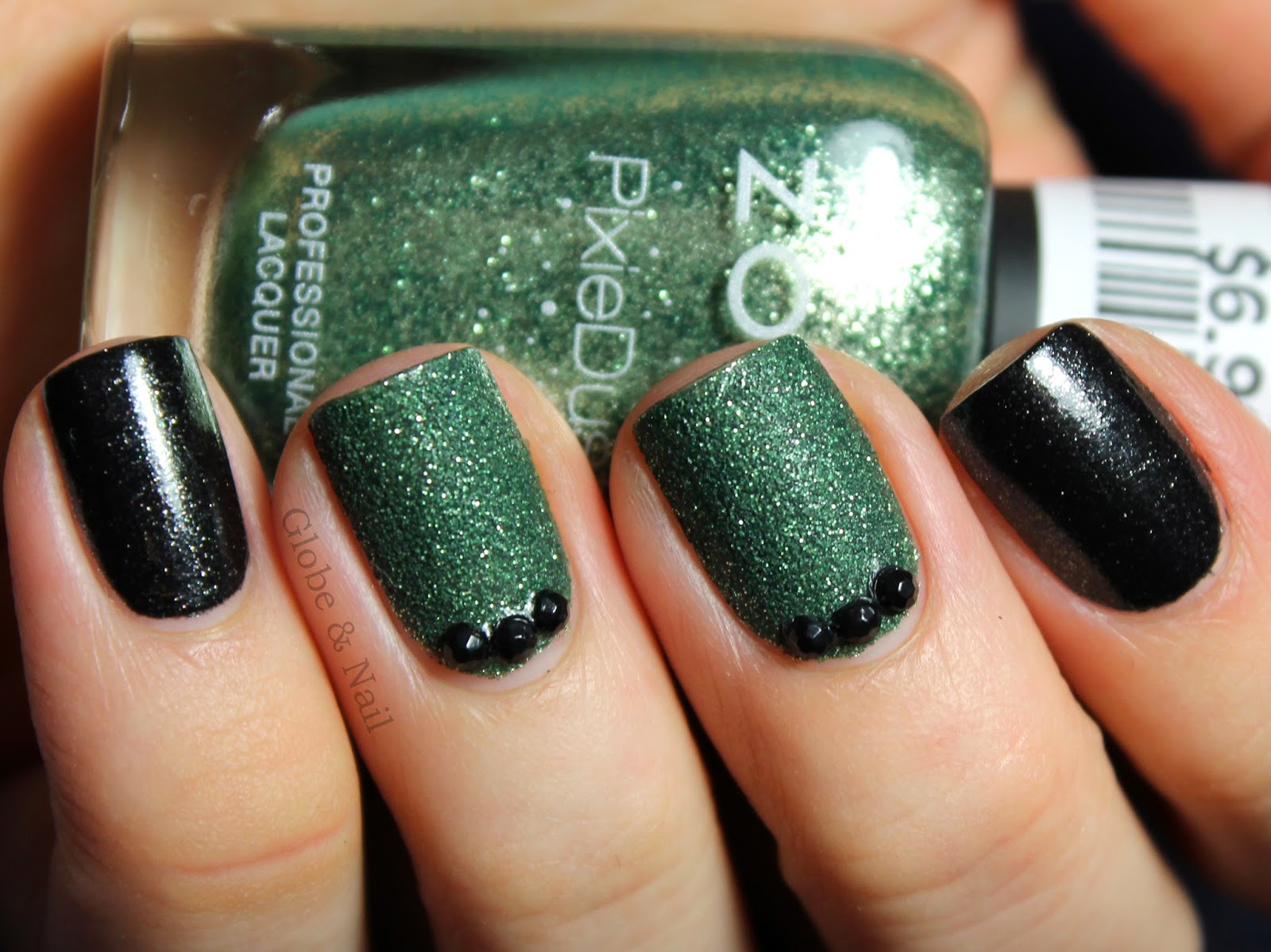 My other nails are all two effortless coats of LaCC 1999, the most perfect black with a lovely deep shimmer.  Those nails are topped with one coat of LaCC 2013  top coat. 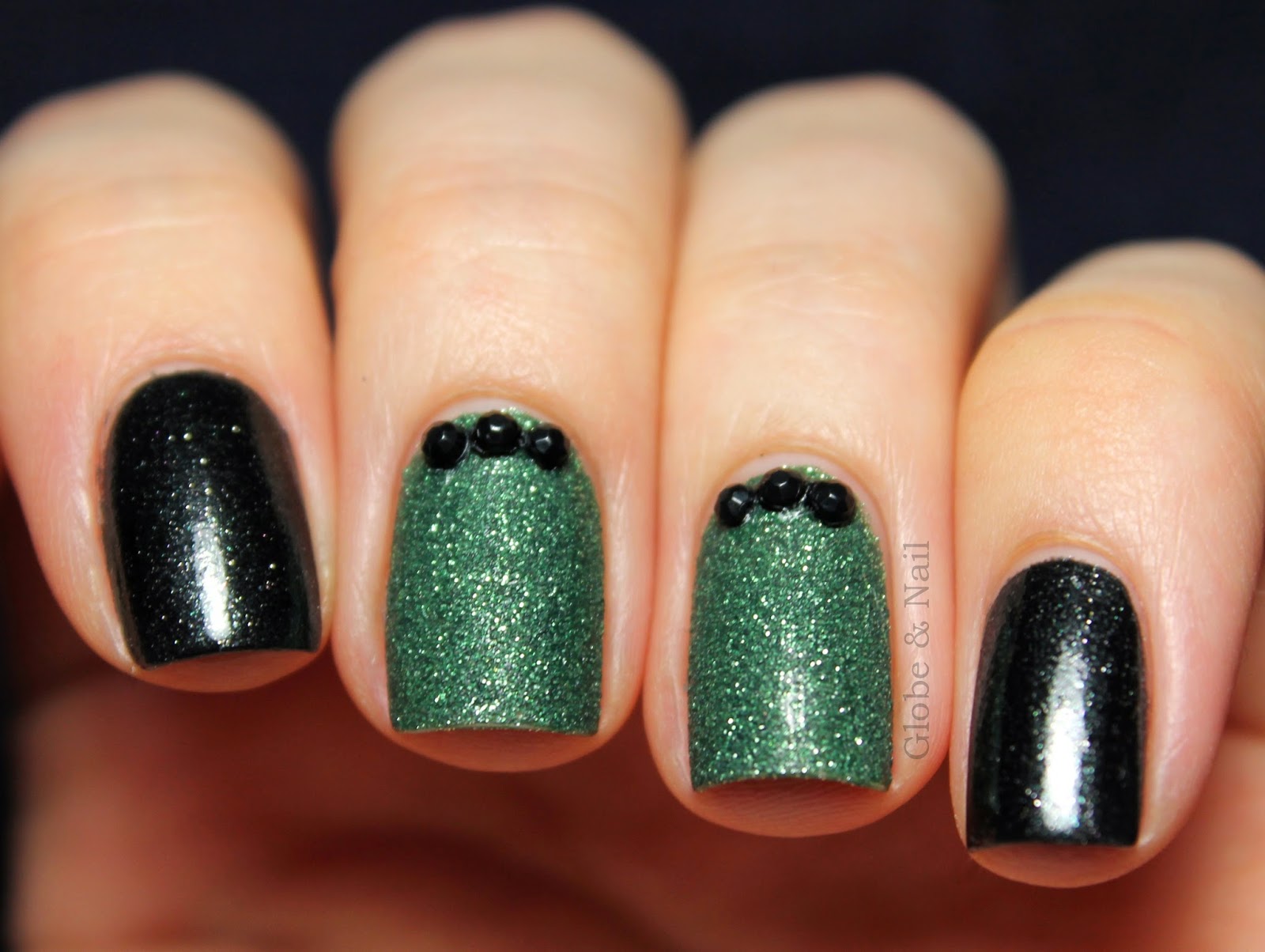 Honestly, I was kind of indifferent about this mani.  Not that I really didn't like it, but I just wasn't a huge fan.  I love these two polishes individually, though!  What do you think? 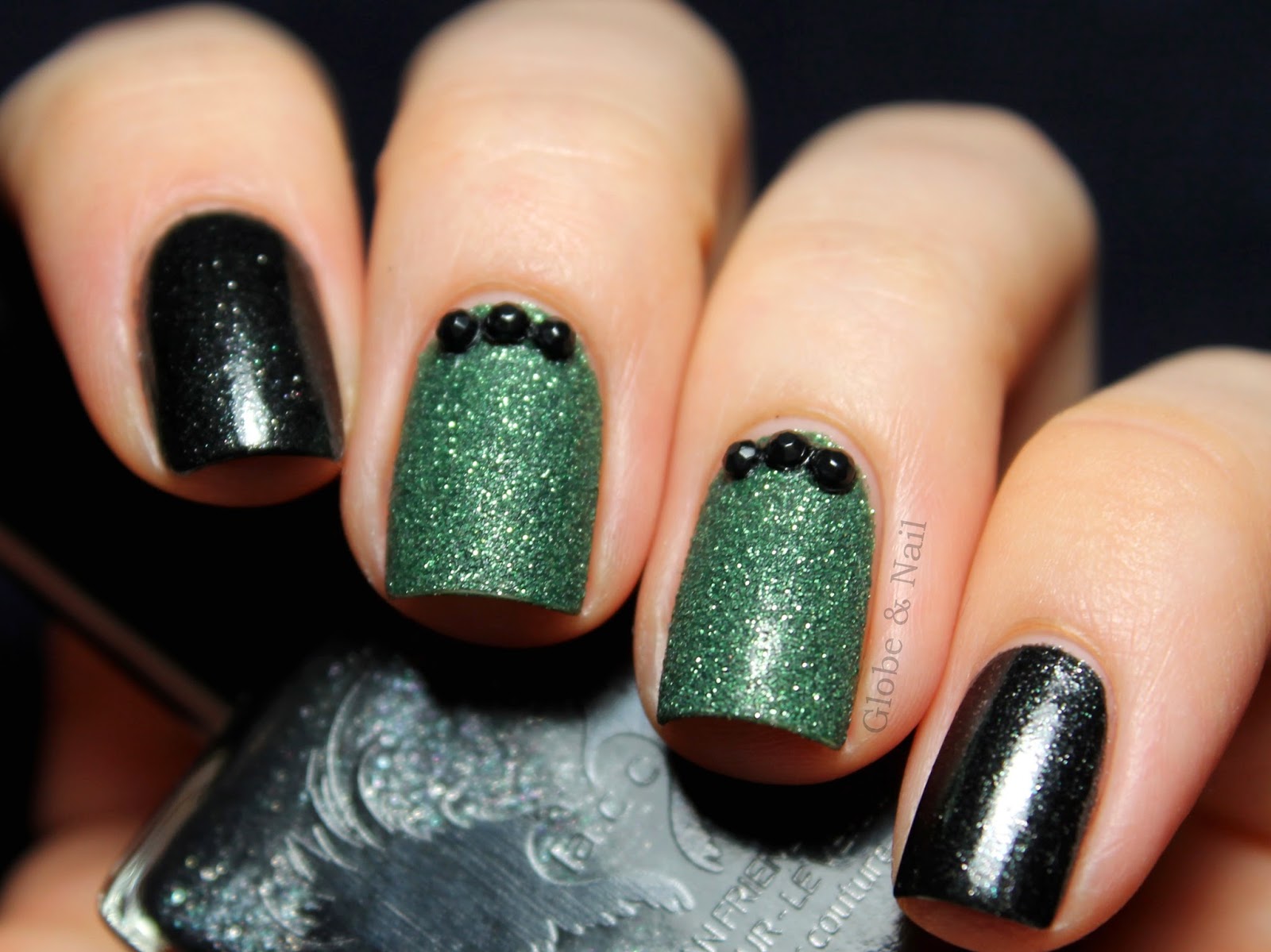 I've recycled the black nails in this mani and switched up the accent nails, so keep an eye out for that post soon!  :)

Good morning!  Just a quick post this morning with a Christmassy look I did a couple weeks ago, but which would have also made an awesome New Year's Eve mani! 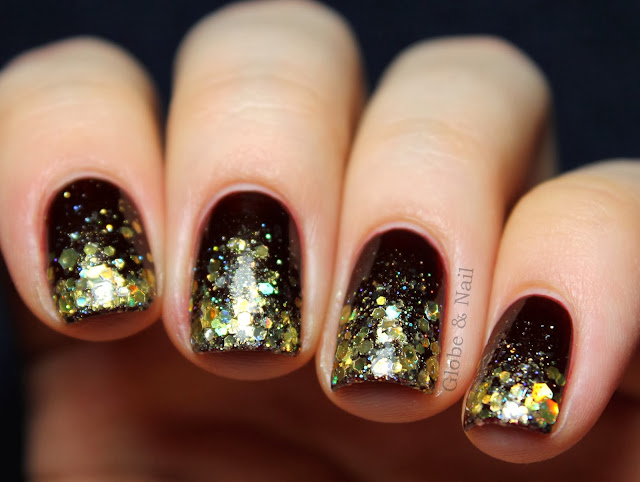 I started with two perfect coats of LaCC 1940, and when that was dry I sponged on a gradient with KBShimmer We Three Blings.  I believe it's topped with two coats of Seche Vite, but don't quote me on that, haha! 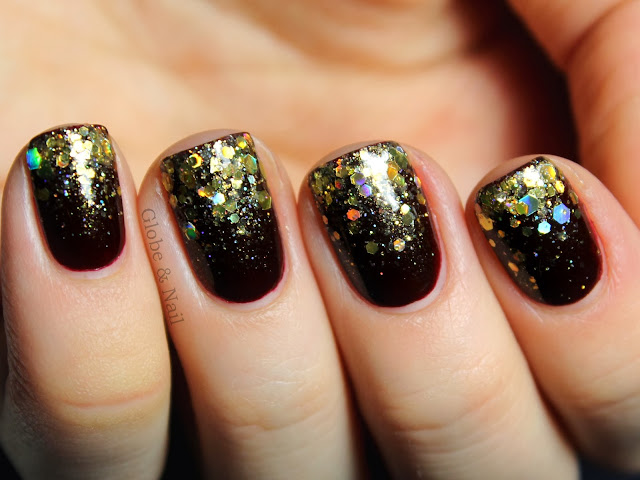 We Three Blings is such a perfect glitter for gradients - I can't believe I haven't worn it since swatting it last Christmas!!  The mix of tons of holographic gold hexes and the tiny golden flakies in the base is so beautiful!  And of course 1940 is the perfect super vampy burgundy shade! 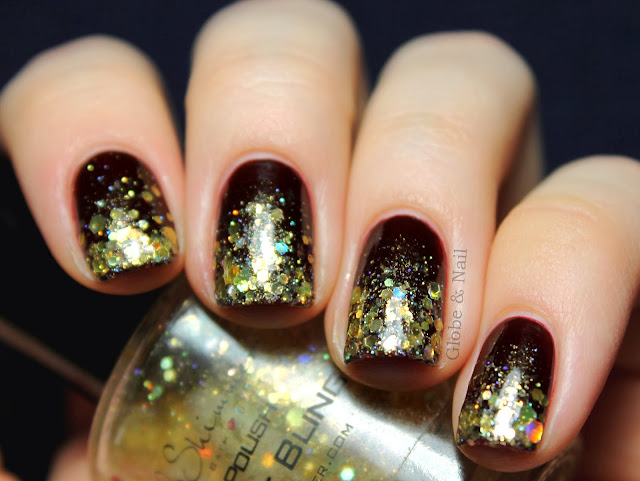 I've really been trying to work on my freehand over the past few months, but it's been a while since I've done a simpler look like this.  Would you like to see more looks that are do-able for people who aren't as comfortable with freehand work?  I'm aiming to post more this new year (I know I've been awful about regular posts recently) and I'd love to know what you want to see more of!  :)

Hi all!  To kick off the new year, I've got five polishes to share with you from a new-to-me Aussie indie brand, Glam Polish! 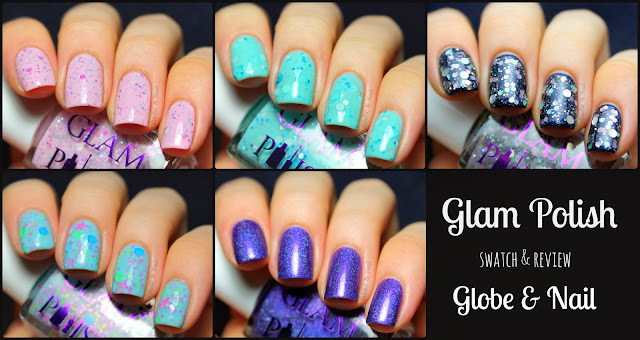